The All-New Toshiba 32LF221U21 is an affordable 32-inch Smart TV that rocks Amazon's Fire TV features and can be had at a very reasonable price, without sacrificing on picture quality and audio output.

The Toshiba 32LF221U21 (2020 model) confirms that Amazon Fire TV platform can be put directly on any TV, without the need for a separate media streamer. Amazon continued its Fire TV push with a new partner in 2018. If you need the newest model with Fire TV built-in, Toshiba is now you go-to model, with the Toshiba Fire TV Edition. The panels are available in different in different sizes – Toshiba 32LF221U19 (32-inch – HD) and the Toshiba 43LF621U21 (43-inch – 1080p).

All TVs in this series are even less expensive than the Element/Westinghouse Fire TV Edition, and the 55-inch model now supports high dynamic range (HDR). The Toshiba 32-inch TV we’re reviewing is the most affordable in this series, it’s functional, but the 720p resolution keeps it from being nearly as strong a recommendation as our Editors’ Choice for budget TVs, the 32-inch 1080p TCL 32S327 Roku Smart TV.

The Toshiba 32-inch TV looks plain, unlike the pricey competitors, so do its larger siblings, with a minimalist glossy plastic bezel around the screen measuring 0.7 inches wide on the sides and top, and 1.3 inches on the bottom edge. There’s an infrared receiver for the remote on the lower right corner, with a Toshiba logo in the center of the bottom bezel. It stands on two feet that are equally nondescript, just glossy plastic feet extending from the bottom of the panel at an obtuse angle.

Still, for a budget TV, the design is quite functional, and like most value TVs, it won’t wow on style. Around the back, there are three HDMI inputs, a USB port, and an optical audio output that sit almost a foot from the left edge, facing left.

Others include an Ethernet port, antenna/cable connector, and an RCA composite video input that face downward, but in the same location. That’s about the same I/O options you find on pricey panels like the Samsung UN40NU7100FXZA. A combo of power/input button rests on the lower right corner at the back of the TV, and that wraps everything for physical controls.

Also included in the package is a Fire TV remote, designed specifically for TVs, and rather big and more complex than the voice remote included with Amazon Fire TV media streamers. Nevertheless, it still is, a slim black plastic wand with a visible black circular navigation pad. Above the pad, there are three menu buttons and three playback buttons below it, while the power and microphone buttons are set on the top of the remote near a pinhole mic.

In fact, that’s the standard layout for Fire TV streamer remotes, only that Toshiba adds a volume rocker, mute and live TV buttons right below the playback controls. Also, they have introduced dedicated service buttons for Amazon Prime Video, HBO, Netflix, and PlayStation Vue. In addition to Bluetooth, you have infrared on the remote, so you can use it to control the TV if the Bluetooth connection drop, without having to re-pair the remote first.

The Amazon Fire TV platform is created in such a way you can use your existing Amazon account to transact on app downloads, renting or buying media, and with an Amazon Prime membership you can access a wide selection of movie streams, TV shows, and music stream as well. So, you’ll need to sign in with your Amazon account to access most of the Fire TV features. However, unlike the typical Fire TV media streamer, you readily don’t need an Amazon account to use the Fire TV Edition.

Still, most users with an active internet connection will want to use their Amazon account to access the full features on the Toshiba 32LF221U21, based on just how enhanced it is as a smart TV platform. With Fire TV, you can access most major streaming services, including Amazon’s very own Video and music, Crunchyroll, Hulu, Netflix, PlayStation Vue, Sling TV, Spotify, and Twitch. Missing from the TV Ecosystem are Google Play Movies & TV as well as Google Play Music. Surprisingly, YouTube loads only via the FireFox or Silk web browsers, instead of its own dedicated app.

Alexa voice assistant access is included in the Fire TV, which you can launch and use by simply pressing the microphone button on the remote and speaking into it. It’s hands-free, just like ab Echo or Echo Spot, but fully functional out of the box with a button press. Again, you can pair the TV with an Echo to access Alexa through the TV hands-free and use your voice to control it.

The Toshiba 32LF221U21 uses a 720p resolution panel, which is the lowest any TV can go lately, but that doesn’t necessarily spoil the party here. Its feature offering and specs are very solid for an entry-level, budget TV that competes with monitors in pricing. This Toshiba 32-inch TV doesn’t support high dynamic range (HDR), a feature that’s only available in the 55-inch Toshiba 55LF711U20, that boasts a crisp 4K resolution.

With that limitation, you aren’t getting particularly wide color gamut on the 32-inch model, and it doesn’t exceed broadcast standards with fairly undersaturated reds. The rest of the colors are well balanced, not tinted, though, not the very vivid, something you expect from a 720p panel. For comparison, the similarly priced TCL 32S327 offers brighter colors, better peak brightness and wide color gamut, thanks to a 1080p resolution panel.

Despite the hum-hum contrast and limited color range on the Toshiba 32-inch TV, BBC’s Seven Worlds, One Planet on HD looks quite nice on it. You can pick fine details like feathers and leaves, but they aren’t as vivid as they are on the Toshiba 55-inch 4K TV. Sunny scenes are bright for our liking, but the panel’s low contrast means that shadows tend to look a bit blown out against the light. Sure, this isn’t the best picture you can find even on a budget TV, but it manages to look quite good considering the existing limitations.

Input lag is the time a display takes to update after receiving a signal. The Toshiba 32-inch TV shows varying capabilities in different modes. In Movie mode, the 32LF221U21 shows a poor 70.7ms input lag, but switching to Game mode cuts down to an acceptable 40.1ms, but still too high for us to consider it good for TV gaming. On the other hand, the TCL 32S327 and the 39-inch Insignia NS-39DF510NA19 both offer much better performance, respectively lagging only 17.6 and 15.9ms in their Game modes.

Power consumption on the Toshiba 32-inch TV is rather pedestrian, without any specific power-saving features or modes available, though you can save a bit of electricity by dimming the backlight. Under normal viewing conditions, it consumes 97 watts of power, while its 4K version consumes 137 watts, which we attribute to the high-res display.

The Toshiba 32-inch Fire TV Edition (2020 model) is a more economical smart TV than even the Element Fire TV Editions from last year, and the addition of Alexa integration is a nice benefit on paper. It does make significant compromises in picture to hit the sweet low price, however, resulting in downright poor black level and color range, but that’s to be expected when you find a 32-inch TV for less $200. Still, the Amazon Fire TV platform is robust with useful features that will blend well for home users looking for a small kitchen/bedroom smart TV.That said, if all you need is a nice, little TV with Amazon Fire TV features while spending as little as possible, the Toshiba 32LF221U21 is great buy. Otherwise, the 32-inch TCL 32S327 remains our Editors’ Choice, even though it uses Roku TV Smart Features, instead of Amazon Fire TV Edition in the Toshiba 32-inch TV. 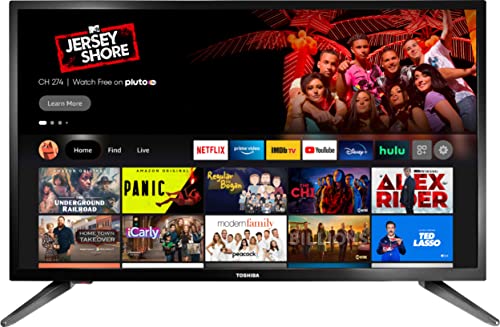