The Samsung UN40NU7100FXZA is a visual dynamo, providing the absolute best value in video performance from the brand yet, and arguably decent picture quality for the money.

As budget 4K Televisions go, Samsung’s 7 Series is one of the best. If your heart is set on UHD and wondering if you should pull the trigger on one of the five sizes available (40 – 65 inches) in this series, let us save you some time and suggest now that you go for it. You’ll not be displeased. This is an excellent television, especially if you don’t have a mint to spend on a new high-end TV. If that’s the case, there’s a good chance you’ve cast your glance at Samsung’s affordable series.

Our review unit is the 40-inch UN40NU7100FXZA flat screen in Samsung’s lineup without the SUHD moniker – or the premium price that accompanies it. The price notwithstanding, it still offers a sleek and slim design, a truckload of features, and easy access to all the 4K content you can handle. While it may not deliver OLED-level picture, or be the videophile’s first choice, this TV brings plenty to the table, making it a top option in the expanding 4K TV marketplace.

The NU7100 is a compact TV, with a fairly attractive profile and average-size bezels. On the back, the TV sports a charcoal-gray, textured panel, which is a better version over the basic, matte-black panels seen on similarly priced competitors. The panel is supported by a pair of attachable feet, with a gray faux-metallic sheen’ they are not unique, but still do a nice job propping the set.

Perhaps the only concern here is that 40-inch is very small for a 4K display, maybe too small. At 40 inches, you have an ideal viewing angle of around 3 feet. However, the NU7100 is small enough to be easily moved and assembled by one person, unlike bigger sets that would require an extra pair of hands.

It weighs just 18.7 pounds, so you can pick it without breaking a sweat, and the 36 x 20.9 x 2.3-inch profile make it a good candidate for a table or countertop. In case you prefer hanging it on the wall, Samsung includes four 200 x 200-millimeter VESA mount holes.

Nowadays, connected features are pretty common in households as ports wane. Still, we can’t rule legacy ports out, and Samsung offers them via a single connector panel on the right side of the TV. On that panel, there are three HDMI ports (one with ARC support), two USB ports, a TosLink digital-audio output, an RF connector for antenna and cable.

Connectivity to the Internet comes in way of a LAN port for wired networks, and 802.11ac Wi-Fi, Wi-Fi Direct and Bluetooth for wireless networks.

Even at the low-price, the 40-inch NU7100 manages to pack features that you’d not expect to get from a mainstream manufacturer such as Samsung, Sony or LG for the price. Top in the list are a 4K resolution and decent HDR support. Plus, it offers compatibility for HDR10, HLG for live-broadcast HDR and even Samsung’s very own proprietary HDR10+ format.

The set produces acceptable color and brightness, although the lack of local dimming causes unwanted backlighting that hampers the HDR support. In Netflix’s latest ‘Our Planet’, sense that rely on stark contrast between silhouettes and colorful coastlines are somewhat dampened by black shadows that turn gray. Not easily seen, though. However, the brightly lit fare, like the ‘The Boy Who Harnessed the Wind’, you’ll easily see vivid colors and fairly smooth transitions.

As expected, there had to be a catch somewhere to hit the lo price point. In this case, color gamut does take a hit. The set produces 98.5 percent of the sRGB color space. That’s not very terrible, considering that it surpasses what many models that cost over $500 offer. Still, it comes behind the likes of the LG UK6300 (99.8 percent) and the Our Editors’ Choice TCL 43S517 (99.8 percent). Viewing angle are nice and wide, with minimal color shifting even when viewed from off angles.

This set offers smart features but not all of the company’s smart features as seen on its premium range of QLED TVs. On the platform, you’ll get the same wide selection of apps, refreshed menu and navigation, as well as wide smart home compatibility. Notably absent, however, is Samsung’s Bixby voice assistant. Also, the included remote lacks a built-in microphone, meaning, there’s no voice search support.

Talking of the remote, it’s a stack difference between the NU7100 and Samsung’s high-end QLED sets, like the Samsung QN55Q80RAFXZA. Instead of a refined One Remote that’s offered with pricier models, something we’ve always loved, the 40-inch budget option gets a very basic remote. Sure, it gets you around the apps, menus and home screen, while at the same time allowing you change the channels and volume. That’s what you’re getting, but we expected a more intuitive navigation.

The Samsung UN40NU7100FXZA is a visual dynamo, providing the absolute best value in video performance from the brand yet, and arguably decent picture quality for the money. We’re still disappointed with the remote, but it gets the job done, and the return of the 4K TV resolution is a win for everyone.

The obvious rival is one we’ve brought up throughout our review, TCL’s 6 Series TV. It offers a 43-inch 4K display, making it a better deal. In addition to the larger size and more affordable price, the TCL offers superior picture quality, both Dolby Vision and Dolby Atmos support, and the kind of voice-interaction the Samsung NU7100 doesn’t include in its package.

Should I buy it?

Yes. For most shoppers looking for decent picture quality attainable under $500. The Samsung NU7100 is the ticket. For video enthusiasts and casual gamers, it’s a perfect shoo-in, especially if shopping on a budget. 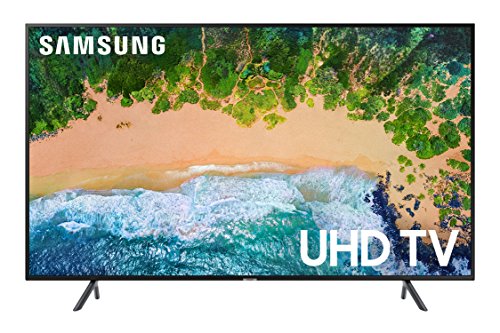