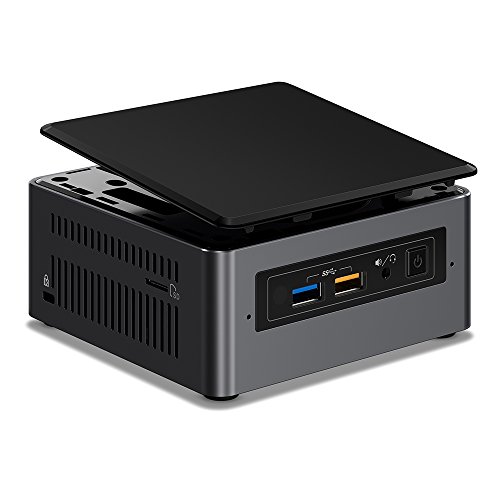 The Intel NUC7i7BNH is the latest entrant into the mini PC market with lots of features up its sleeve. As part of Intel’s Next Unit of Computing (NUC) line, it enters the category when competitors are releasing powerful out-of-the-box miniature desktops, some targeting professional artists and content creators. The NUC 7’s design makes it near-invisible but it packs enough muscle for office tasks, light media tasks, and is well-suited for media streaming.

As always with most Intel NUCs, this one is a pure bare-bone SKU to which you’ll add memory, storage, and OS. That’s where it all starts to count. Out of the box, this latest-gen model sports a 7th Generation Intel Core i7-7567U and Intel Iris Plus Graphics 650 graphics card. To that specs sheet, it adds a dual-drive scheme that lends surprisingly robust loadout options in such a tiny chassis.

For the kind of applications that demand for the smallest possible desktop P, this new NUC advances the state-of-the-art usability. But as ever, whether fully preconfigured or bare-bones, the DIY route you’re taking will attract a premium for all that minification. Interestingly, it may be well worth every dollar you spend.

The NUC7i7BNH we’re reviewing is part of Intel’s top-end bare-bones, that you’ll need to configure as per your needs. Intel is also offering a fully configured Windows 10 Pro-equipped configuration, budded the NUC8I7HVK Mini PC and fitted with the OS, an Intel Core i7-8809G processor, 32GB RAM, AMD Radeon RX Vega graphics and 512GB SSD storage. That’s some real power there that can sustain complex computing tasks and even 4K video streaming via the included Thunderbolt 3 port.

Our test model features a black and grey color scheme that isn’t outrightly snazzy but easy to blend in, lacks storage, RAM, on an operating system (nonetheless, it is Windows 10 ready). On the other hand, it does include a beefy 7th Generation Intel Core i7-7567U processor, a robust two-core CPU with a 3.50GHz base clock. A four-thread solution in a PC this tiny is quite an achievement, looking back at the NUCs of the past.

When looking at the NUC7i7BNH Mainstream Kit’s price, it looks expensive, but compared to bare-bone models from the likes of Zotac or Shuttle, the Intel option delivers more value over the competitors. First, most competing bare-bones come pre-configured, but the NUC7i7BNH lets you scale the RAM and storage according to what you need. Compared, the NUC 7 gives you more flexibility than in most PCs this size.

That’s because the drive orientation here allows for two installed drives, in two types. There is an M.2 slot on the mainboard, which will readily take up either SATA or PCI Express NVMe drives. Also, it can support Intel Optane Memory modules, incase you need to cache a hard drive. Also, or instead, you can install a high-capacity 2.5-inch hard drive, or a 2.5-inch SATA SSD into the 2.5-inch bay nested under the bottom cover.

This scheme of combining an M.2 drive and a hard drive can easily allow for 6TB or more of combined storage, for as long as you’re willing to spend the money. On the other hand, the 2.5-inch laptop-style hard drives and SSDs, you can max-out at 5TB and 4TB, respectively. To install a 2.5-inch drive, all you have to do is slide it into the bay onto a pre-positioned data and power connectors; unlike the M.2 that requires a Philips screwdriver.

As for RAM-installation, you again get more flexibility on the NUC7i7BNH than you might expect. There are two SO-DIMM slots that support DDR4 laptop-style DIMMs at speeds of up to 2,400MHz. If you have some old DDR3 memory lying around, it won’t work here. On each slot, you can install up to two modules of DDR4 at 16GB each.

The NUC7i7BNH has a typical port layout as with previous NUC-size mini PC. You get a pair of USB 3.1 Gen 2 Type-A ports on the front. The yellow port can be used to charge USB devices, supplying up to 1.5 amps. Next to these USB connectors, you have a power button, a drive-access indicator light, and an audio in/out combo jack. The left edge holds a microSD card slot and a Kensington-style security lock. Wireless connectivity comes in way of 802.11ac Wi-Fi and Bluetooth 5.0.

The rear side holds most of the connectors including, an extra two USB 3.1 Gen 2 Type-A ports, a USB Type-C port that supports Thunderbolt 3, an HDMI port, and an Ethernet jack. The HDMI output is connected to the CPU’s Intel iris Plus Graphics 650.

The single HDMI on the NUC7i7BNH can support up to three external displays at resolutions of up to 4K: one hooked to the HDMI port, and two more inter-connected off the DisplayPort interface, which is routed via the NUC 7’s Thunderbolt port. You will need a dongle for this setup to work. Still, it gives you a platform to fire 4K panels, probably TVs in the home and a monitor in the home-office.

By combining Intel Iris Plus graphics and a Core i7 CPU, the NUC7i7BNH is definitely a competent performer, especially when used for everyday computing tasks. You can, for instance, install on the bare-bones 8GB of SO-DIMM-style RAM and a 240GB Plextor M.2 PCI Express SSD to get the system up and running. Since the system lets you install any amount of memory (up to 32GB) and a huge variety of storage options, you’re not limited on the power you can squeeze out of this NUC.

Whichever configuration you choose, you’re assured of strong overall system performance for office-centric tasks such as word processing, spreadsheet work, web browsing, and videoconferencing. In fact, the proprietary hardware used her permits for processor intensive workloads as well. At the very minimum, it should outperform the entry-level, Core i3-based 2018 Apple Mac minion most tasks.

On the other hand, the Iris Plus graphics are reasonably powerful among graphics processors that borrow from the main system memory instead of using their own. They are a cut above the integrated Intel HD graphics processors used on mainstream laptops and desktops. As such, they deliver great visuals and can even be used for casual gaming alongside media creation workloads.

The Intel NUC7i7BNH Mainstream Kit is a tiny, no-pushover PC that is equipped with powerful ancillary hardware and connectivity like Thunderbolt 3, and delivers peppy little powerhouse performance than most mainstream desktop PCs. If anything, the included hardware and state of the art expansion represent a new level of DIY expeditions in a very small desktop system.

Here is where we need to look at the missing pieces of equipment/software. Of course, we also look at the cost of each. To put together a Windows 10 Home license, 8GB of RAM, and a 256GB M.2 SSD, you’re looking at spending around $700 for the NUC 7, in addition to OS installation (may need an external DVD drive, or an installer USB key).

For a typical DIYer, you might be having all these at hand. If not, then we might hold out for the 2019 Intel NUC Mini Business ‘dubbed Bean Canyon’, that readily offers an 8th Gen Intel quad-core i7-8559U processor, 8GB RAM, 500GB HDD + 128GB SSD and Windows 10 Professional pre-installed.  While at it. You avoid the inherent hassles of installing Windows, Windows updates, and drivers.

Should I buy it?

Yes. If you need to go the DIY route and build something future-proof and full throttled for your computing needs, the NUC7i7BNH offers the best heads up than any other bare-bone Mini PC around.