The iBUYPOWER 1000iV2 is a gaming PC that you can consider as you next big investment, with a modern chassis and high-end specs that gamers demand in their gaming

For something so simple, the iBUYPOWER 1000iV2 looks attractive. With its transparent side window and a gamer-inspired façade trimmed with the renegade iBUYPOWER logo, it’s got lots of style in an otherwise common chassis. This is an appealing gaming PC that’s so over-the-top in its gaming aesthetic, but it doesn’t end up looking gaudy.

But how does it stack against its budget brother, the iBUYPOWER Trace 4 9310. The 1000iV2 has the looks, for sure, and ticks all boxes for a gamer looking for an elegant design, but a gaming rig can’t just get by on looks alone. Can it match the competition?

Short answer is yes…especially when you look at its pricing, specs and available configurations. It’s now more powerful and features some of the latest hardware including Intel’s 10th Gen Core i7-10700F CPU and an Nvidia GeForce RTX 2060 GPU. This model plays 1080p like butter, and you don’t have to splurge on its innards to hit the high echelons.

Those who are more partial to over-the-top gaming designs will find the iBUYPOWER 1000iV2’s design a tad satisfying. Not that it has all-chassis LEDs, but the few available are cleverly distributed on the front and sides. For instance, you have a three-point LED strip on the front panel, and the side window panel lets you shows off the innards, spotlighted by the RGB lighting on the chassis ceiling.

The front façade has its lower section tapered, reminiscent of the monument power it represents, with a silver iBUYPOWER logo etched below the LED strip. Beyond that, however, the iBUYPOWER 1000iV2 doesn’t have any frills, which we can honestly appreciate. We also like that it adopts a more minimalist gaming desktop look, and doesn’t remind us of the old towers with straight up rectangular designs.

Like its predecessor, the 1000iV2 has a diverse number of ports available, with some on the front and others in the back so you have a variety of ways to connect your peripherals. It has four USB 3.0, two USB 2.0, Ethernet, and Audio 7.1 jack.

On the VR ready RTX 2060 graphics card, there are more ports – DVI, HDMI and DisplayPort for multi-monitor setup. That’s a rich collection for all your devices, including VR headsets. Bundled in the package are iBuyPower branded keyboard and mouse, but for the monitor you can consider something like the SAMSUNG Odyssey G5, bought separately though.

Because the iBUYPOWER 1000iV2 has one main configuration that’s pretty distinct, we’ll therefore focus on this review unit, which, while souped up, isn’t the most expensive option in the iBUYPOWER gaming line.

One awesome this bout this 1000iV2 is that it touts Nvidia’s RTX 2060 (6GB RAM) GPU. This, we want to mention again, is a GPU far superior than the GTX 1060 and has certain advantages over the GTX 1650. Not only does it run faster, but its Turing architecture allows for real-time tracing that brings incredible performance to the latest games and to every gamer.

iBUYPOWER pairs this GPU with the new 10th Generation Intel Core i7-10700F and 16GB RAM, both meant to handle demanding games and applications, thereby guaranteeing decent gaming and productivity performance. For storage, you have 480 GB SSD boot option, and an additional 2TB HDD to store all your games and other documents.

The RTX 2060 used here is at the lower end of Nvidia’s 20-series range, but it’s still a great GPU. For 1080p gaming (and occasional 1440p), if the game being played is too demanding, it delivers great performance, and the price point of machines featuring this graphics card is often low compared to those featured higher-end GPUs in this series.

In other AAA games, similarly, you expect everything to play like butter. Whether you’re playing Final Fantasy XV, The Witcher 3 or Hitman 2, all at 1080p (High settings), you’ll run into almost zero issues, even with maxed settings. That’s you don’t experience any latency or tearing, just smooth gameplay and rock-solid performance.

The iBUYPOWER Gaming PC reviewed here is a fantastic, affordable machine that looks good and feels solid in-game. While it isn’t the most powerful machine around, but for the reasonable price, we can consider it an entry-level powerhouse that’s capable of running processor-hungry tasks and AAA games seamlessly, ensuring that you gaming experience is completely immersive.

Yes, you’ll have to shell out more cash if you need the absolute beast gaming PC that can run modern AAA games at the highest settings and even 4K. In that case, consider something like the Omen 30L (GT13-0092) or the Alienware Aurora R11, both with the latest flagship Nvidia GeForce RTX 3080 GPU. But, be prepared to spend a worthwhile fortune for the additional gaming and processing power.

If you can’t spare more than to grand, that’s OK as well. The iBUYPOWER 1000iV2 will set you back much less and get you through high settings beautifully. And since it’s designed to be upgradable, you can throw in better hardware later on when you can afford to. 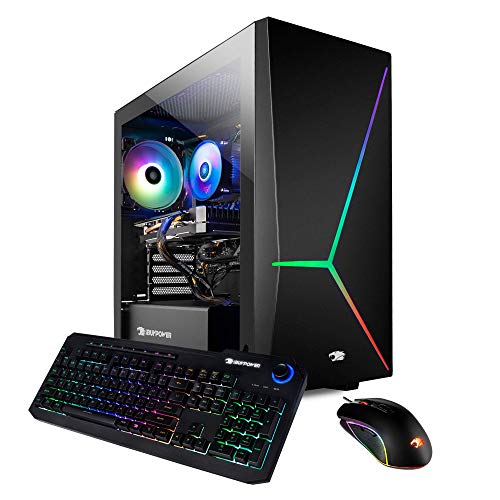