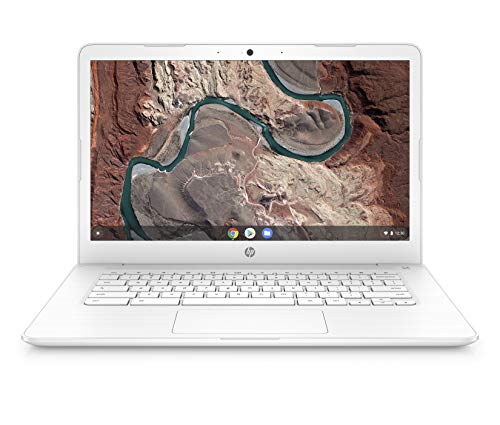 Chromebooks keep expanding, in screen size, performance and popularity. In just a few years, they’ve moved beyond schools and budget gadgets available in your local mart, into homes and coffee shops. Still, you have some like the HP Chromebook 14-db0030nr that are as inexpensive, easy-to-use alternatives to Windows notebooks and MacBooks.

The HP Chromebook 14 we’re reviewing fuels that adoption with a 14-inch panel that’s big enough to get work done, paired with a keyboard that doesn’t feel cramped. Its battery lasts all day on a single charge and has a sleek white design that feels like a luxury at this price point. While other Chromebooks like the Asus Chromebook C425 offer better performance, the Chromebook 14 is a good all-rounder for basic tasks.

This Chromebook 14 looks really different from the usual silver-themed budget machines you often see in the market. This one features a refreshed white color that easily stands out from the crowd. The lid of the HP Chromebook sports a rough feature with a glossy HP logo etched in the center. Once you open the lid, you’re welcomed by a brushed white deck, white keys and white, nut narrow display bezels.

While a white design looks unique and sexy, part of me worries that the machine will look dirty over time, especially given its target group(s) are kids and the K-12 market. Nonetheless, the white surfaces look beautifully as they break the monotony of silver chassis found on premium ultraportables.

As expected at this price point, the entire Chromebook 14 is cut from plastic, though with a few rugged touches. I’m pretty sure it could survive the shoves and pushes of a typical classroom, which isn’t something you can commonly say of a sub-$400 laptop. At just 0.7 inches thick and weighing only 3.3 pounds, the HP 14-db0030nr is very light and portable, as compared to, say, the 15-inch Acer Chromebook 15 (0.8 inches, 4.4 pounds) and Asus Chromebook C523NA (3.8 pounds), but slightly heavier than the Lenovo Chromebook C330 (2.6 pounds).

For a budget laptop, port selection here is good. On the left side of the HP Chromebook 14, you have a USB Type-C port, a USB 3.0 port, and a lock slot. The right side holds a microSD card slot, a headphone jack, and an additional pair of USB 3.0 and USB Type-C ports.

HP didn’t score better here, delivering a 720p screen instead of a bright 1080p panel. The screen’s 1366 x 768 resolution panel is fine for day-to-day use, but a higher resolution would be better the low price notwithstanding. As expected, the panel appears a little grainy but overall, you’ll be impressed by the quality for the price, even if some images will look slightly washed out.

The display’s black level max out at 0.84cd/m2, which is a bit low that what we’d hoped for and its contrast isn’t also great at 284:1. It covers 58.4 per cent of the sRGB color gamut, meaning you can’t really do any intensive color work here, such as image editing and video processing.

There isn’t much to complain about the HP Chromebook 14’s white keyboard, except for the lack of backlighting. The white, chiclet-style keys are comfy, well-spaced and large, but some arrow keys are undersized. And while it has only 1.2 millimeters of key travel (short of our 1.5mm preference), the individual keys feel bouncy, perhaps due to the above-average 71 grams of actuation force.

Right below the keyboard is a 4.5 x 2.3-inch touchpad that responds quickly as you swipe your way across several Goggle Chrome tabs. Again, you won’t have issues pulling off Chrome OS gestures, like switching between tabs with a three-finger swipe.

Our HP Chromebook 14 configuration is about as robust a budget Chromebook as you’ll find. It features the AMD Dual-Core A4-9120 processor, 4GB or RAM and 32GB flash storage. As you’ll see, the HP 14-db0030nr cannot keep pace with the HP Chromebook 15 and two other models with Core i3 CPUS, the Acer Chromebook 714 and Lenovo Yoga Chromebook C630. Still, considering it price point, you’re getting more computer than you’re paying for.

Turned off and on again, it takes 11 seconds to reach the Google sign-in screen, which is on par with most budget Chromebooks and nearly twice as fast as most budget Windows-based laptops.  Once powered, the HP Chromebook 15 feels peppy and is able to run Chrome OS with ease, even under light multitasking scenarios with more around half-dozen browser tabs open. It also streams HD (720p) videos and runs Android apps smoothly.

Pairing a small, 2-cell battery with a sizeable, 14-inch display adds up to decent battery life. Lasting just over 9 hours 23 minutes on a single charge, it is able to outlast most models and, if you’re hitting it hard, likely you’ll get through a full workday like most Chromebooks nowadays do.

Still, you can get a longer runtime under more start-and-stop, lid-open/lid-shut usage scenarios than continually playing video, but on raw battery life, it’s fairly competitive with other similar-size Chromebooks.

In the budget Chromebook category, the HP Chromebook 14 is a top contender, delivering solid specs and acceptable performance for the price, and its all-white enclosure is both attractive and durable. The fairly big, bright display and surprisingly comfortable keyboard make it a smart choice for college and entertainment. We only wish it had a 1080p resolution display, something that limits its appeal, but that’s not a deal-breaker especially when shopping for a basic laptop for college. Its most fitting use is as an inexpensive and easy-to-maintain mid-size screen laptop for students, watching Netflix and movies at home. The Asus Chromebook C425 remains our Editors’ Choice for its premium design, a vibrant 1080p-res screen and solid overall performance.