The HP 22-b016 is a budget all-in-one desktop that offers powerful performance on daily productivity tasks including media consumption and MS Office projects, but doesn’t cost much.

The HP 22-b016 may not be the most powerful AIO PC around, but for a budget all-in-one desktop, it offers more value for artists’ basic productivity and multimedia needs. If you can spend a little more, the Acer Aspire C24-865-ACi5NT has a newer 8th Gen., ‘Coffee Lake’ processor, a higher-quality screen and better connectivity options.

If you’re on a strict budget the HP 22-b016 is a good alternative that will get the job done.

Not always do you find a white casing appealing on a desktop PC, but the 22-b016’s white plastic body is distinctive and nice looking. Being an AIO PC, all components are housed in the 15.7-by-21.23-by-7.2-inch (HWD) casing; the systems weighs 12.16 pounds. The 21.5-inch IPS display is supported by a four-legged stand, making it one of the most stable all-in-one PCs out here. On the top bezel, there is a webcam and microphones, while the bottom bezel holds the speakers.

On this model, HP upgraded the screen from the 1,600-by-900 resolution on last year’s HP 20-c010. The newer iteration has a 1,920-by-1080 resolution with antiglare coating, not very bright, but understandable considering the price. It now displays large letters and 1080p videos better, though you might still see some pixilation in images.

For a budget AIO PC, the HP 22-b016 offers more value than you’re paying for, with a screen that is perfectly adequate for general eb browsing, viewing YouTube videos and reading emails. Plus, the speakers deliver high-quality audio, with clear bass that doesn’t suffer from much distortion even at full volume.

On the right side of the system, there is an optical drive (ultra-slim DVD tray) and the three-in-one card reader sits at the bottom, right next to the Power button. Everything else is located on the rear of the screen, including a security cable slot, USB ports (2 x USB 2.0, 2 x USB 3.0), an Ethernet port, a DC power-in input, an HDMI port and a headphone/microphone jack. Speaking of headphone/microphone jack, its location at the back is a bit confusing, like seriously how do you plug a headset to the back of a screen.

It’s also unfortunate that the bundled mouse and keyboard will take up two of the USB 2.0 ports, so you’re left with only the USB 3.0 ports for your peripherals. Wireless connectivity comes by way of 802.11b/g/n Wi-Fi and Bluetooth 4.0.

The system comes with a 1TB 7,200rpm hard drive, which is more than enough for any average user. At this price range, we didn’t expect a solid-state-drive (SSD), but this storage option is sufficient for downloads, storing your projects and media files. The 22-b016 does, however, come with a few preinstalled bloatware including Dropbox, HP Games, Trip Advisor and all of HP’s support software, which should not be a problem uninstalling.

The 22-b016 is powered by a 1.6GHz Intel Celeron J3710 quad-core processor, 4GB of memory, and integrated Intel HD Graphics, not a so-powerful setup, but good enough for daily pursuits. With an average CPU Mark of 1,956 points, this is much better than the Intel Celeron J3060’s 1,590 points, used in the HP-c010. This combination affords the 22-b016 solid performance on everyday tasks. For instance, it lets you keep 10 browser tabs open, stream full-screen YouTube video with little lag, and image-heavy sites will load without any hassles.

For multimedia tasks, the 22-b016 is really meant to be used for casual viewing, nothing outside that. It will take longer to encode files, which is usually a strong hold for multimedia desktop PCs. It is the same case with gaming, which isn’t a strong suit for the HP AIO, but at this price, we didn’t expect it to be.

If you must run games, that will ultimately be the most basic games, but the integrated graphics card isn’t meant for anything more intense. If you must play, you’ll have to look elsewhere, at something like the CYBERPOWERPC Gamer GXIVR8020A5 or the Dell i7777-7569SLV-PUS All-In-One PC.

If your budget can’t stretch beyond the $500 limit, but need a desktop PC (that will save space while adding some flair to your desk), the HP 22-b016   might be for you. Granted it is not the most powerful AIO system around, it doesn’t have a touchscreen, but it handles simple tasks very well. Plus, a 1TB hard drive for storage is a straight leg up over less expensive and smaller alternatives like the ASUS UN65U-M023M VivoMini and the Intel Compute Stick –though, if you connect them to your monitor or TV, any of these mini PCs could deliver the same (or even better) functionality and cost less. 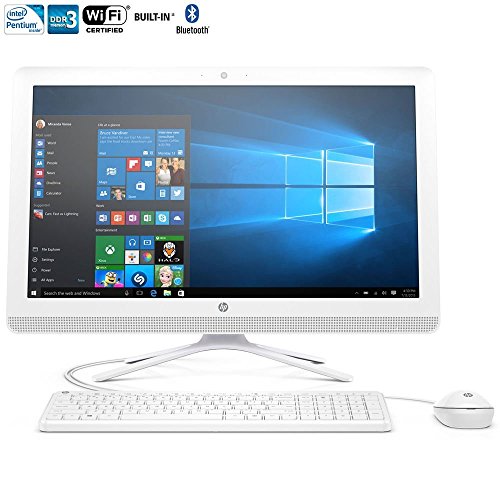