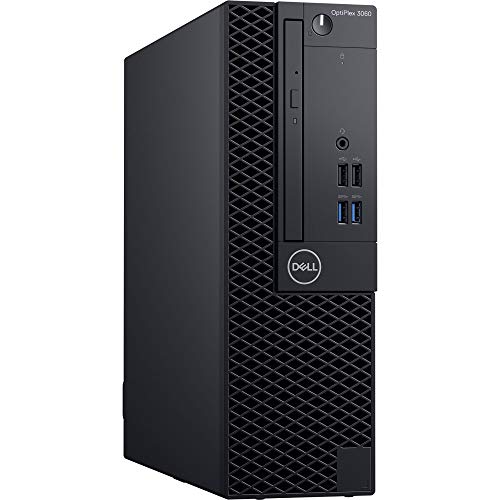 The Dell OptiPlex 3060 Small Form Factor is a utilitarian business desktop, that will fit almost anywhere ion your desk. It looks like every other Dell desktop that you’ve had in your organization, but this one has been updated with an 8th-generation Intel Core i5 processor, making a difference on how fast you can calculate a 20,000-cell spreadsheet or prepping a media release. For a shared office, a small form factor (SFF) case means a lot, more importantly the fact that it doesn’t take up as much space a traditional desktop PC would.

Even with the small footprint, it has some internal expansion room, making it a valuable buy over competing midrange business SFFs. If you need to deploy multiple systems in your organization, or need a reliable PC for a small office, the OptiPlex 3060 SFF is a capable addition to your company’s IT arsenal.

Measuring 11.4 by 3.6 by 11.5 inches (HWD), the OptiPlex 3060 SFF will certainly fit on most workspace desktops. The HP 8300 Elite SFF is slightly bigger (13.3 by 4 by 14.9 inches (HWD) but has very little expansion room on the inside. Speaking of room inside, the Dell 3060 has space for an additional memory DIMM (two total, one filled), a half-height PCIE x1 card, and a half-height PCIE x16 graphics card. That means you won’t be able to install a full-height card such as the Nvidia GeForce GTX 1060.

Not surprising though, other SFF systems including the Lenovo ThinkCentre M720, have the same PCIe card restrictions. Like other Dell Optiplex SFF systems, the Optiplex 3060 SFF has a tool-less hard drive bracket with expansion slots: You may not need a screwdriver to swap components, that will save you time on repairs. It doesn’t come with a bundled monitor, for which you can grab something like our Editors’ Choice ViewSonic VX3276-MHD professional monitor.

Business systems like the Optiplex 3060 SFF come with Microsoft Windows 10 Professional and hardware drivers preinstalled, and it’s a relieve that there isn’t much preloaded bloatware on the 256GB solid state drive. Thankfully, the speedy SSD is boosted by 8GB of RAM to deliver fast and exciting productivity performance. There’s a free DIMM slot in case you need to throw in additional RAM. The Optiplex 3060 SFF comes with a basic wired keyboard and mouse.

Connectivity comes in way of two USB 3.1, two USB 2.0 and headphone jack on the front side, next to a tray-loading DVD drive. Around the back there are more I/O ports including: Two USB 3.1 ports, two USB 2.0 ports, HDMI, DisplayPort, and a line-out audio port. For Internet connections, there’s an Ethernet port, but the system lacks built-in Wi-Fi. If you need wireless support, you’ll have to buy an 802.11ac card with Bluetooth, something like the Edimax EW-7611ULB wireless adapter.

The desktop is powered by an 8th-generation Intel Core i5-8500 (hexa-core) processor running at 3.0GHz (up to 4.1 GHz in Turbo), with Intel HD graphics, 8GB of RAM and 256GB SSD. The six-core processor is a big step over its predecessor that came with a sixth-generation quad-core processor and 500GB hard drive storage. The new hardware add muscle to the overall productivity, with the system excelling on general business tasks and multitasking including Web browser and office apps such as Microsoft Word, Excel and Power Point.

You can even get away with basic Photoshop manipulation tasks, including image editing and other tasks that business users are likely to perform every day. That’s quite impressive for an SFF machine that doesn’t cost so much. Obviously, users of tiny business desktops with integrated GPUs aren’t buying to play intensive games on them, and that’s true of the Dell Optiplex 3060. If you need something for the office and can play games on the side with a dedicated GPU, the Dell i5676-A696Blu offers an AMD Radeon RX 580 graphics card in a mid-tower business case.

The Dell Optiplex 3060 Small Form Factor is a decent choice for the small-to-medium-size business that’s certainly poised for exponential growth in the near future. It offers seamless expandability and serviceability than most mid-tower competitors that lack easily replaceable components. It’s fairly serviceable than the HP 8300 Elite SFF that doesn’t offer much room for expansion.

If you want to save a little cash and are willing to compromise the SFF profile, the mid-tower Acer Aspire TC-885-ACCFLi3O isn’t a bad alternative. On the other hand, if you don’t mind an All-In-One for around the same rice but offers better overall performance, the Acer Aspire C24-865-ACi5NT offers strong productivity performance in an office-friendly design.

Yes. It won’t satisfy people looking for a high-end system, but if all you want is a reliable business PC on a budget, the Dell Optiplex 3060 is for you.