The CyberpowerPC Gamer Xtreme VR GXIVR8560A delivers the performance you need in a familiar design, that are part of a wide-range of pre-built configurations to choose from. The Gamer Xtreme version we’ve reviewed can either be an economical system for the casual gamer or a worthy investment for the enthusiast gamer.

The CyberpowerPC Gamer Xtreme VR GXiVR8560A is a custom mid-tower gaming desktop. Hand-crafted at the company’s headquarters in City of Industry, California, the Gamer Xtreme can be configured to meet a wide range of budgets. CyberPowerPC Even offers custom specs and hardline liquid-cooling if you want to go the extra mile.

Our review unit is well equipped for the budget gamer, and that helps keep its price in the realm of reality. (Well, for the components inside, they would cost slightly more if you decided to build it yourself). The hallmark hardware in the GXiVR8560A includes Intel’s flagship Core i7-9700F processor chip and an Nvidia GeForce GTX 1660 graphics card, making it an ideal system for 1080p gaming.

Coupled with a well-cooled case and familiar LED lighting, this latest iteration of the CyberPowerPC Gamer Xtreme sets a high standard for midrange gaming, one that you’ll hardly top even if you go the DIY route.

Gaming cases are slowly losing on RGB lighting, with gamers looking for something more refined and sophisticated, than just throwing out the lights. Unlike the HP Pavilion 690-0010 that exercises restraint, the CyberpowerPC Gamer Xtreme VR GXiVR8560A opts to include LEDs on the case, like its peers in the midrange category. The front is smooth with a CyberPowerPC logo, at least when powered off.

Once you switch it on, a trio of RGB circles pop behind the glass panel, and they look exquisite. Moving left, the tempered-glass side panel does a great job of showing off the RGB-lit internals of the Gamer Xtreme. The panel slides off after loosening four thumb screws on the side. I like that the fact that the thumbscrews come with retainers, so they don’t have to be fully removed, and potentially lost.

For physical connectivity, the CyberpowerPC Gamer Xtreme VR GXiVR8560A offers plenty of ports in any configuration, as you’d expect from a desktop. On the high-end configurations, with GeForce RTX 2080, you’ll find a USB-C port for the VirtualLink connector. In the midrange category, though, you’ll have to do with multiple cables to drive your VR headset. The Nvidia GTX 1660 graphics card used here supports Virtual Reality (VR) headsets like HTC VIVE and Oculus.

Like the CyberpowerPC Gamer Xtreme VR GXiVR8060A7 (see review), the new Gamer has easy access ports on the front, including two USB-A ports, audio and headphone jacks, and a power button. Around the back, there are six USB ports, an Ethernet jack, and two legacy PS/2 ports for your older mouse and keyboard. The system’s Displayport and HDMI connections allow for dual-monitor setup, meaning you can hoop up two monitors, like Our Editors’ Choice Acer SB220Q bi side-by-side for easy multitasking.

CyberPowerPC lets you customize the Gamer Xtreme, all depending on the hardware you want, ranging from last year’s GTX 10-Series to the latest Nvidia RTX 20-Series GPUs. Our review unit, is in the midrange category,  powered by a 9th generation Intel Core i7-9700F, and Nvidia’s newer GeForce GTX 1660 graphics card. To the six-core 3.0Ghz processor, it adds 16GB of RAM, 120GB SSD + 1TB hard drive, all enough to deliver acceptable performance on daily productivity tasks and most modern esports titles.

As a daily-use PC, the Gamer Xtreme is powerful enough for web browsing, moderate photo-editing, and heavy productivity tasks, most consumers will appreciate the performance boost with the Gamer’s Core i7 processor. More intensive task, such as video encoding may require more time to complete, but it’s within the upper-range for budget desktop PCs.

When we thought PC gaming was fading in the wake of much affordable and powerful gaming consoles, Nvidia throws in the RTX 20-Series graphics cards and everything changes. Now, you have the Nvidia GeForce RTX 2060, 2070, and 2080 alongside their Ti variants and Max-Q variants for laptops. The new technologies offer real-time ray tracing and deep learning super sampling (DLSS), meaning you can nab over 130FPS on modern titles in 4K and highest possible settings. That’s if you’re willing to walk the entire journey and pay the high prices, which are well worth the performance you get from these refreshed chips.

Then, there is the GTX version of the Turing-based GPUs that gives up on features like DLSS to hit low prices for the midrange gamers. The Nvidia GTX 1650, GTX 1660 and 1660Ti are part of Nvidia’s new Turing architecture, but they still retain the ‘GTX moniker’ like the Pascal cards from last year. These TU116 GPU are proof of just how low Nvidia is willing to go with its Turing architecture, by making them available at low prices, but making them better performing that the likes like of GTX 1060 and in some cases GTX 1070.

Getting more performance at a lower price and support for VR headsets is great.  It benefits from some architectural enhancements, higher clockspeeds, and more shade cores, than last year’s GTX 1060 (6GB) GPU. The GPU at the heart of the GTX 1660 Ti is the same as TU116 found in the 1660, only that two SMs have been enabled, in turn enabling 128 CUDA cores and 8 texture units.

Our review unit, the CyberpowerPC Gamer Xtreme VR GXIVR8560A is fitted with Nvidia’s GeForce GTX 1660 graphics card. On real-world gaming, it delivers impressive frame rates per second (FPS) than its closest rivals, especially when played at 1080p. For instance, Assassin’s Creed: Odyssey played at 1080 (Very High Quality) yields 63fps, which is better than the Radeon RX Vega 56’s 58 fps, while the GTX 1060 maxes at 54 fps.

The same is replicated in The Witcher 3: Wild Hunt (61 FPS, 52 FPS, 46 FPS) and Warframe (173 FPS, 148 FPS, 149 FPS), respectively.  Given that the GTX 1660 can render most modern games with modest graphics, like Civilization VI and Fortnite, at frame rates above 60 frames per second (fps), some gamers will indeed appreciate the smooth game play.

The CyberpowerPC Gamer Xtreme VR GXIVR8560A)  delivers the performance you need in a familiar design, that are part of a wide-range of pre-built configurations to choose from. The Gamer Xtreme version we’ve reviewed can either be an economical system for the casual gamer or a worthy investment for the enthusiast gamer. Either way, it represents real value over most mainstream gaming desktops in the market.

Yes. If you’re replacing an aging rig, the CyberpowerPC Gamer Xtreme VR GXIVR8560A is a solid gaming PC that offers excellent performance for its price.

Otherwise, if you’re upgrading from a GTX 1070 (or above) system, it may not be worth it. In that case, you better off with the iBUYPOWER Trace 9220 that fires everything up to RTX 2070 alongside an overclockable Intel Core i7-8700K processor. 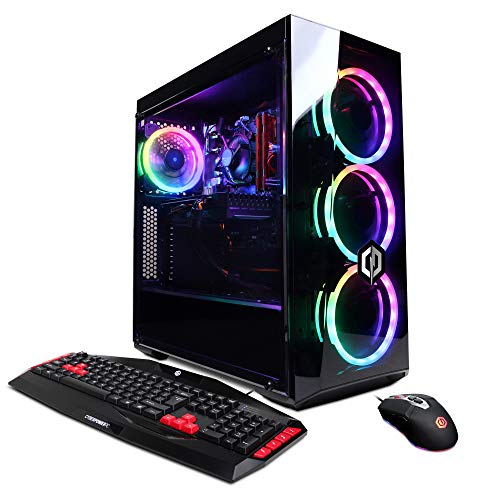