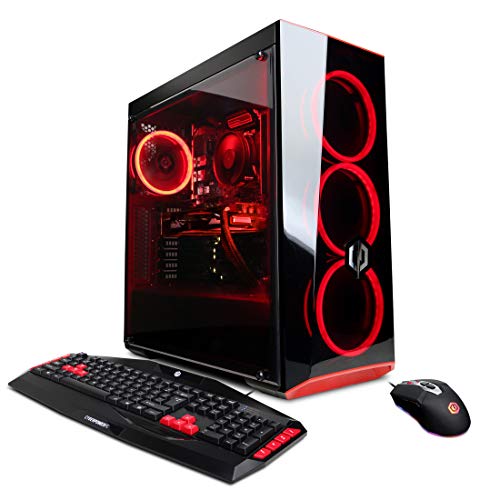 Intel’s RTX 2000 Series graphics cards are quietly taking over the mid-range PC gaming, and that should excite anyone looking to try PC gaming — or upgrade, if you’ve been out in the woods for a while. After all, the les you spend on a good GPU, the more processor you can afford. Our CYBERPOWERPC Gamer Xtreme GXiVR8480A illustrates just how far you can game on a light budget.

Available in the same case as its predecessor the – Gamer GXiVR8060A6, this version too looks like a playful consumer desktop tower with a tinted tempered glass side window and a trio of LED circles on the front panel. It comes out as an attractive focal piece on any desk.

A simple polygonal-shaped steel box with a good taste of LEDs. That’s ho best you can describe the casing used here. The desktop measures 18.5 x 17.9 x 7.9 inches, making it a bit compact than the iBUYPOWER Elite Slate2 084i, but fairly bigger than the HP Omen 880-190. An all metal construction adds to the PC’s premium styles and gives it extra durability, the unit is still not very portable at 27.8 pounds. Given that you won’t be totting your gaming rig around, that’s not a deal-breaker.

Hopefully, CyberPowerPC’s tame design will make this PC feel as modern today as it will ten years down the road. You’ll appreciate the fact that apart from the LEDs and transparent side panel, this machine is free of obtrusive vents, aggressive grills, and Sci-Fi angles. The materials used here and the design will keep the GXiVR8480A from looking dated over time, which is a nice thing, considering the unit’s price and upgradeability.

Another highlight here is the near tool-less access to the internals, which can be done via a side glass panel. While the feature is similar to most gaming PCs nowadays, CyberPowerPC went a step further to ensure that the glass is sturdy and easy to remove and only held in place by for screws. Doing so ensures that the glass door is only removable when you seriously need to access the internals.

While having front-facing ports is always great, not all of those ports can be accessible as you think depending on their position. In its standard layout, the Gamer Xtreme’s two front facing USB 3.0 ports, audio jacks and power button are located on the upper panel, towards the front. This placement is very ideal for a tower that sits on a desktop, and can sometimes go on the floor – whichever you choose, the ports are easier to reach.

Around the rear of the unit, there are more ports including four USB 3.1 Type-A ports, audio ports, an Ethernet port, two USB 2.0 ports (for connecting the bundled keyboard and mouse). There’s also a HDMI and two DisplayPort  ports on the RTX 2060 graphics card for connecting to external displays. For a VR-Ready system with HTC VIVE and Oculus Rift, having more ports is a bonus. Wireless connectivity comes via an 802.11AC Wi-Fi adapter.

Depending on your budget, the Gamer Xtreme line has different configurations with as much power as you can afford. The machines can be outfitted with silicon from either AMD or Intel, and our unit comes with the latest 9th-gen Intel Core i5-9400F processor on an Intel B360 chipset. Creatives with a need for speed or gamers can upgrade to either AMD’s 16-core Ryzen Threadripper or Intel’s beastly 18-core Core i9-9980XE silicon for class-leading gaming and media performance.

For now, our review unit stacks up well against similar Core i5 and AMD Ryzen 7 equipped systems. Thanks to the presence of 6 cores throttling at 2.9GHz, processor performance does not seem to be an issue despite its minimal upgrade over last year’s Core i5-8400 chips. Compared to last’s year chip, gamers will realize that this one runs a bit quiet.

To the performance, it adds 8GB of RAM, a 120 GB solid state drive and an additional 1TB hard drive storage. For quiet operation, it is fitted with a closed-loop liquid cooler that you can see as a nifty clear cover over the CPU heat sink.

The NVIDIA GeForce RTX 2060 (6GB) used here is an upgrade over last year’s GTX 1060 GPU, but still remains a mid-level graphics processor. It is an affordable version of the big-bangers in Nvidia’s new series of GPUs, the GeForce RTX 2080 and the elite GeForce 2080 Ti, both are impressive tech but their price points make them wish-list fodder for most of us.

If you’re shopping for a gaming PC on budget, the RTX 2060 is the highest you can go with the new silicones. Aftermarket models demand more, but CyberPowerPC just includes everything that should be included with an RTX 2060. It’s a Founders Edition which is not factory overclocked like most aftermarket cards, something that you can easily remedy by overclocking it yourself.

Its forte is gaming at 1080p (1,920-by-1,080) and 1440p (2,560-by-1,440-pixel) resolutions. So far, AMD hasn’t countered with a competitor, the circa-2017 Radeon RX Vegas 56 is perhaps the closest, but it still lags well behind the RTX 2060 in overall performance. The only competitor comes from Nvidia’s own house: the recently announced GeForce GTX 1660 Ti, with good 1080p and 1440p gaming, but lacks but it lacks the hardware-accelerated ray tracing and Deep Learning Super Sampling (DLSS) features that largely define the GeForce RTX 20 series.

CyberPowerPC’s Gamer Xtreme GXiVR8480A runs modern games well that you won’t notice any serious slowdown for the next many years, and it maintains its muscle during everyday use. This desktop doesn’t have strong competitors, thanks to a reasonable sticker price and a vibrant feature set, including a Nvidia RTX 2060 GPU.

The CyberPowerPC Gamer Xtreme, equipped with an RTX 2060 graphics card, keeps the GXiVR8480A honest. The iBUYPOWER Trace 9220 is perhaps the only alternative around, equipped with an Intel Core i7-8700K processor and a better Nvidia GeForce RTX 2070 (8GB) graphics card. If you’re a more serious gamer, you’ll want to consider the Trace 9230.

Yes. If you don’t have the patience to source your own parts and build your own rig, the Gamer Xtreme GXiVR8480A is a great pre-built alternative that’s competitively priced and well equipped to deliver the kind of performance most gamers need. Again, building your own is surely going to cost more. Though targeted at mainstream gamers, it packs enough features, RTX power, a familiar design – that make this PC appealing to the enthusiast.