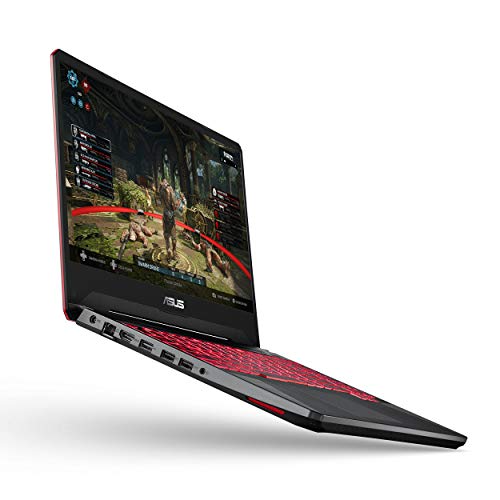 Most gaming laptops, even those at the entry level, will set you back around $1,000. For the price, Asus TUF FX505DY-ES51 seems like a downright kill. Its AMD Ryzen 5 3550H Processor and AMD Radeon RX 560x perming for gaming at low or medium settings, and the audio is decent. The laptop’s 256GB solid state drive is fairly fast, but its 1080p display doesn’t show off games and other media because its rather dim.

You’re definitely getting what you pay for, so there are a few sacrifices you’ll have to make with this affordable machine. Other laptops in the Asus FX505 Series including the Asus TUF505DU-EB74 pack Nvidia’s never, and powerful graphics cards, and can run modern games with ease, but there has to be a budget machine in the series for budget gamers. That’s our review unit today.

Will it keep up with the competition in the budget nice, while maintaining the TUF Series’ excellent score card?

With ultraportable like Asus’ own Zephyrus S and Razer Blade 15 dominating the gaming looks, we can’t say the FX505DY-ES51 isn’t good looking. It is clad in a plastic case with faux-aluminum brushing and red pain accents on the lid, that gets the job done. Asus’ own logo is caught in the red mix-up in the center of the lid, with a Zephyrus-like cutout that shows status lights even when the laptop is closed. A neat feature right there.

The inside looks pretty much like the outside, with a slim bezel surrounding the 15.6-inch screen. The deck is made of the same plastic material as the lid, but the keyboard is backlit, in red. At 5.8 pounds and 1-inch thin, this laptop is portable, though not the most portable at this price range. The Dell G5587-5859BLK-PUS is a bit heavier at 6.28 pounds, while the HP Pavilion 15-cx0042nr weighs in at only 5 pounds. Not surprising though, budget gaming laptops rarely go under 5 pounds.

In making the FX505DY-ES51 affordable for the average gamer folk, Asus did cut corners with the display. Yes, it is a 1080p IPS panel, but it looks bald and uninspired, with acceptable color reproduction, but we feel it would be better. Since we have Chromebooks out there with better color reproduction, we at least expected a more vibrant display on a gaming system, the price point notwithstanding.

Nonetheless, the screen is sharp, and could easily make for a daily use laptop. When buying on budget, it goes without saying you’ll make sacrifices along the way, and Asus have it right on the eyes. It covers just 66 percent of the sRGB color gamut, which is far below the 98-percent entry level average.

On the Asus FX505DY-ES51, the keys are well placed, offer 1.4 millimeters of travels and require a strong 76 grams of force to actuate. While that’s a little off our preferred 1.5 millimeters, the keyboard doesn’t feel like its bottoming up. Perhaps, the only issue you might have with the keys is that they might feel slightly bouncy, but you get used to it after sometime.

The keyboard has a number and and is backlit, only in red. For the bargain price, you can’t get around complaining of the FX505 not having a full RGB keyboard. It gets a 4.1 x 2.8-inch Windows Precision keyboard that responds well to four-finger taps and four-finger swipes to reach Timeline. It lets you navigate Windows easily, though the plastic feels slippery and cheap.

Connectivity comes via a pair of USB 3.0 ports, a USB 2.0 port, HDMI output, an Ethernet jack, a power jack, and a headphone jack. All these are housed on the left side. The right side only holds a Kensington lock slot. This laptop skimps on a USB Type C port, something that’s becoming pretty standard even on budget notebooks.Wireless connectivity comes via 802.11ac Wi-Fi and Bluetooth 4.2. Also missing is an SD card reader, which we can easily overlook, just like we nowadays do with optical drives on laptops.

Considering that the TUF FX505DY-ES51 packs AMD’s Ryzen 5 3550H APU, 8GB RAM and 256GB solid state drive, it is a fast-paced machine for the price. This Picasso-generation chip has 35 W thermal design power (TDP) clocked at 2.1 GHz spread across its four cores. It utilizes AMD Turbo Core to achieve a beefier 3.7 GHz on all cores, making it a direct competitor to Intel’s Core i5-8300h CPU, though it can’t really match the Intel chip on performance benchmarks.

For daily productivity, you can still get through with over 15 Chrome tabs open and a few YouTube videos streaming in the background. Adding an additional memory module will peak everything at 16GB, but it still works well out of the box with the pre-installed 8GB. As configured, this laptop can deliver on any productivity task thrown its way, may it be media processing or a Microsoft Office project, when not playing.

When Nvidia released its flagship RTX 20 Series GPUs, AMD countered with RX Vega 8 chips meant to offer the same level of gaming excellence. To date, both of these chips rule the high gaming echelons. While the Vega 8 rule the skies, the good old-fashioned AMD Radeon RX 560x (4GB DDR5) inside the FX505 still packs a punch. It lets you shine in the Battlefield V, at 1920 x 1080 resolutions with the settings set at High, and still averages 46 frame rate per second (FPS), and 48 FPS in GTA V.

For a budget gaming laptop, that’s acceptable, but the scores improve to 54 and 83 FPS respectively, in medium settings. With this kind of gaming muscle, the Asus FX505DY-ES51 may not be the most powerful gaming laptop around, but it remains a viable competitor to most GTX 1050 or GTX 1050 Ti laptops in the market, the likes of HP 15-cx0042nr and Dell G3579-5941BLK-PUS.

Late last year, we reviewed a gaming ultraportable with the best battery life in this category. Since then, more gaming ultraportables have popped with all day battery life, but they cost over two grands. If buying on budget, you’ll have to do with mediocre battery life, like the 3 hours 58 minutes you’re getting with the FX505’s 3-cell battery. The entry level average is 4:37, and the Acer Nitro 5 gets a longer spin at 7:13.

The Asus TUF FX505DY-ES51 is a great, budget gaming laptop in some respects, including smooth gameplay no matter what you’re playing in medium settings. It also has a decent 60Hz display and a backlit keyboard, albeit a single theme. Yet those benefits come with uncomfortable screen colors, poor battery life and missing USB Type C port. It might be billed as portable, but it’s more like a mobile desktop than a true laptop.

Nvidia’s RTX-20 series graphics launched with forty gaming laptops. Forty. Most of them are expensive but there are affordable ones below the high-end speed demons, equipped with GTX 1660 and GTX 1660 Ti GPUs.

Maybe. If you’re on a very strict budget you can give it a try. While I applaud Asus’ willingness to try something new, the Asus TUF FX505 hasn’t convinced me the positives of its unique design are worth the problems.

If not on a tight budget, I would easily go with either of the above alternatives. However, with a capped budget, I will grab the MSI GV62 8RD-275 or the Dell G3579-5965BLK-PUS, anytime.